or the past few years, I have wondered how the Immortal Air claim that their regulators can get up to 30% more shots stacks up. Sooo I tested…To do the test I did the following.

-Got two new regulators – Ninja Standard and Immortal Air Aura both set at 550 PSI output press.
– Used a Bob Long G6R that was just serviced
– Shot Valken Graffiti with slight underbore of .682 with Freak barrel
-Used the same Ninja 68/4500 bottle and switched the regulators
-Filled tank to 2000 PSI, and let cool for 45 minuets then topped it off to 2000 PSI.
-Shot slowly and consistent around 2 bps, to make sure the tank temperature was not changing from test to test.
-Shot until the tank went down to 1000 PSI.
-Then repeated three times in total with both the Ninja and Immortal regulators. 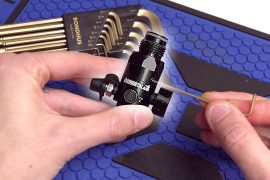