This holiday season, pick yourself up a super limited edition Planet Eclipse CS1 or CSR.

Over the next 14 days Planet Eclipse will be releasing some super limited edition fade CS1 or CSR, each day a new gun will hit the Planet Eclipse store. The guns will all be one of one, making them some of the rarest guns the company have ever produced. The colors have all leaked but the order at which they will be listed is still up to Planet Eclipse.  The first of the fades is the black/electric blue at the oddly low price of $1425.00, typically the fade guns sell for $1745.00. The low price and its rareness make this a great buy for anyone in the market for a CS1. 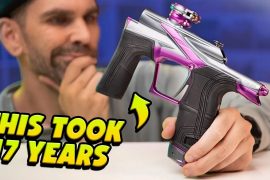