As the name would suggest, the Gtek 160R is an iteration of the current Gtek, rather than a new gun.

The Gtek is a great paintball gun; Planet Eclipse packed a lot of performance into an affordable package. The Gtek is reliable, quiet, lightweight, and easy of paint. The Gtek’s biggest weak spot is the build: the trigger frame, feedneck, back-cap, on/off knob and eye covers are all composite. The Gtek also comes with macro-line, which at times can be a bit finicky and troublesome.

The Gtek 160R’s main purpose is to take care of the complaints that users had with the Gtek. Some people weren’t fans of the composites used in the Gtek or the macro-line, so Eclipse got rid of it. The price of $795 is also made to compete directly with the Shocker RSX, a gun to which Eclipse has likely been losing sales.

The primary differences between the Gtek and Gtek 160R:

Right away when you pick up the Gtek 160R, there is a noticeable difference in feel. The 160R just feels much better: the aluminum parts feel much more high-end. The aluminum allows for tighter tolerances, making the foregrip and trigger frame grips fit the frame much better, and giving the gun a much more solid feel. The air transfer pipe is also very noticeable (obviously), and I for one really like them. I’m used to playing with the Geo 3.5, and I normally rest my palm on the pipe, so going to the 160R feels very natural. Some may like the change and some may not, it really is a question of preference. I, for one, like the AT pipe.

Because the 160R uses the AT pipe and did away with the macro-line, a new on/off had to be added. There isn’t much special here, just a different air routing system. The knob feels good, is easy to turn, and works perfectly. In the coming months, an upgraded POPS on/off will be available for an additional $66.

The trigger on the 160R has also been changed. There are now four points of adjustment: pre-travel, post-travel, spring tension, and microswitch adjustments. The Gtek only has three: pre-travel, post-travel, and spring tension. More points of adjustability will allow players to better dial in trigger feel to their preference. The 160R also takes a cue from the CS1 in using trigger shoes rather than a whole trigger. The trigger shoe design allows just the face of the trigger to be changed out rather than the entire trigger. Any trigger or future trigger that fits the CS1 will work on the 160R. Planet Eclipse has also added dual ball bearings to the pivot point of the trigger. The bearing sounds like a great idea and I’ll take it, but I honestly couldn’t tell the difference. 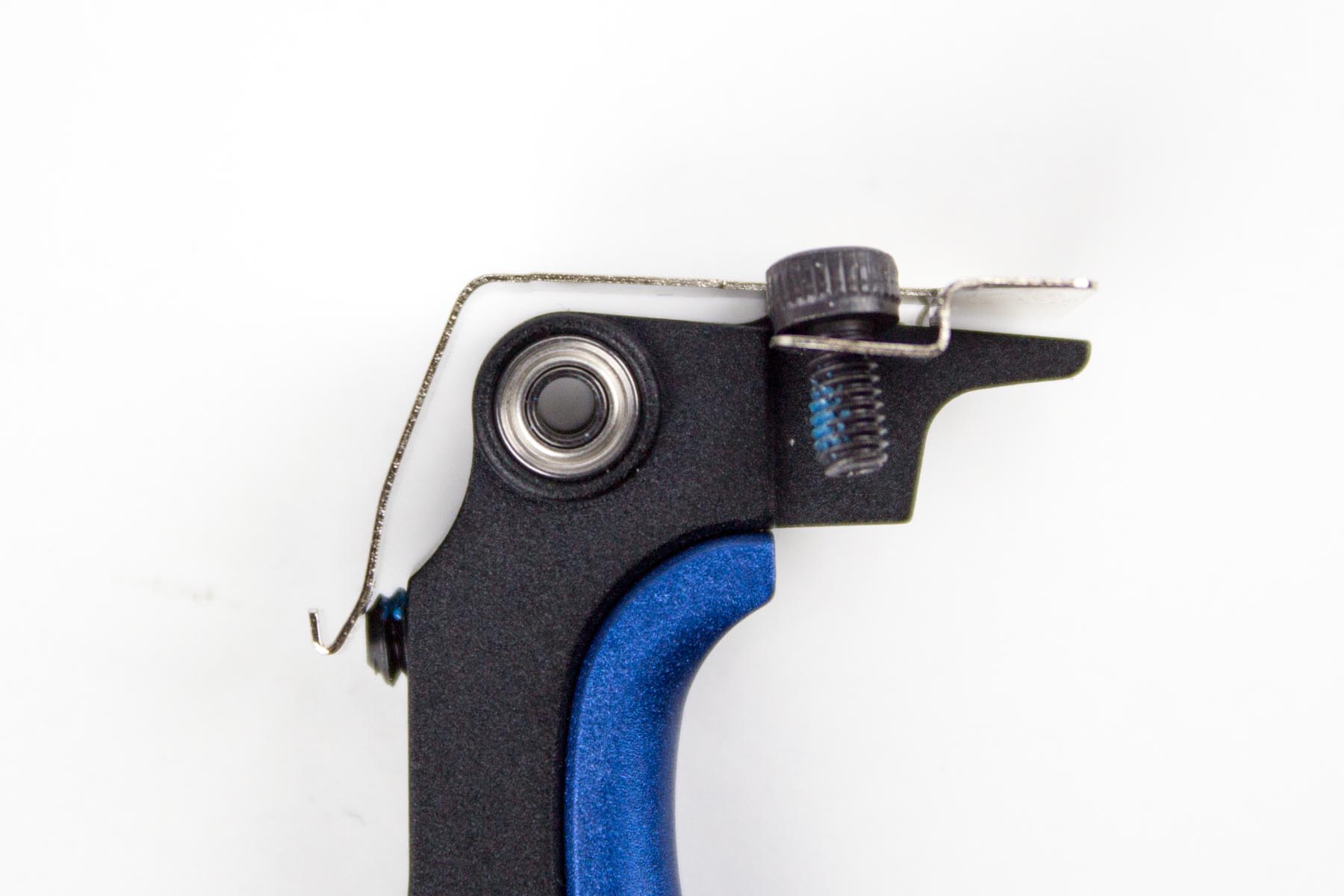 While the trigger is improved, it still feels very much like the trigger that comes in the Gtek. After spending the better part of an hour trying to get the trigger just as I like it, it still felt a bit mushy and slow. I’m primarily going to blame this on the design on the trigger. As a way to cut costs, Eclipse has decided to use the leaf spring for the trigger return, just like the Gtek or Etek 5. Eclipse’s high-end guns like the CS1, 3.5, and LV1.1 use magnets for the trigger return, making it a much crisper and sharper return. Maybe it is just me, or the gun that I have, but I cannot get the trigger setup how I want. With my Geo 3.5 it was perfect out of the box and I never had to touch it. Then again, the Geo 3.5 is a $1,400 gun versus the 160R at $800…with that price difference there has to be another difference somewhere.

The addition of the OLED board is a nice touch. The OLED board makes it much easier to change settings and check battery level. OLED boards on paintball guns that are over $700 are practically compulsory at this point. The Gtek and Etek 5 are both upgradable to the OLED screen – but it is a $100 upgrade, a lot when you figure the guns are only $550.

With the technical stuff out of the way, let’s talk about something you probably actually care about: “How does it shoot?” Better, kind of.

The Gtek 160r uses the same bolt, regulator, and solenoid found in the Gtek, but it’s all aluminum. The all-aluminum construction does make the gun shoot a bit better: the aluminum helps reduce some of the vibration created when the gun fires. The aluminum also makes the gun sound a little different. The 160R has deeper sound, much like the Geo 3.5, rather than the crisper sound signature with the Gtek. While the gun does sound different and shoot different, these differences are very minor. I had to shoot one gun right after the other to notice the difference, so the difference is small.

While the aluminum construction helps the feel and the shot quality, the performance is identical. As I said before, the 160R uses the same bolt, regulator, and solenoid found in the Gtek. So expect the reliability, efficiency and gentleness on paint to be the same.

Is it worth it? To me, the answer is no. It shoots very similarly, feels better, but comes with an OLED screen. The Gtek 160R is a better gun, but at $795 it is not a better value. The difference in shot quality to me just isn’t worth it. With the extra $250 that the 160R costs over the Gtek, I would rather get a new hopper or save the money and play more paintball. If you are the type of person who really needs or wants the OLED screen, then the 160R is more appealing since it is only $150 more than the Gtek would be with an OLED screen.