Lets face it paintball can be expensive! We are all looking to save money where ever and whenever possible. Below is a list of some of the best value and cheapest paintball guns on the market. We have included guns that we trust. There are paintball guns that can be bought for cheaper than the ones we have listed below, but feel that they are more trouble than they are worth. 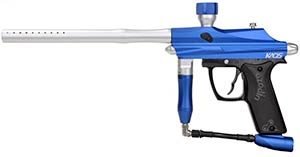 The Azodin Kaos is one of the most popular paintball guns in the sub $100 price category. Many people look at the Azodin paintball’s gun and see a Spyder knock-off, to be honest thats what it is, but thats a good thing. The Kaos is super reliable, lightweight and if need be is very easy to take apart to service or repair. The Azodin Kaos comes with a 12in barrel, twist-lock feedneck and stainless steel braided hose.

The Azodin ATS is in a lot of ways is identical to the Chaos. It has many of the same core features as the Kaos but with a little more flare and tactical look. The two major differences between the Kaos and the ATS are the looks and the lack of the twist-lock feedneck on the ATS. The picatinny rails on the side of the ATS make it easy to attach a laser sight or flash light. 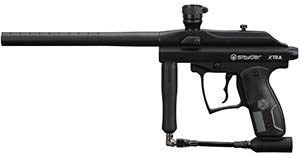 The Spyder Xtra in some variation has been out for over a decade and for good reason the thing just works. They are dead simple and are built to last. Spyder paintball guns have been around for over 20 years and are known for being the most reliable paintball guns on the planet and best of all they are cheap!

The Spyder Extra also feature Spyder new Eco valve that will increase air efficient by up to 25%. That means you can get nearly 2000 shots of a standard 20oz Co2 tank!

The Spyder MR100 is very similar to the Spyder Xtra, the main place it differs is its looks. For just an extra $10 you can get the sweet tacticool look of the Spyder MR100! The stock, picatinny rails and SS hose all come stock on the MR100. Unlike the Spyder Xtra though the MR100 does not come with the Eco valve, so air efficiency will not be as good.

The most popular paintball company on the planet is Tipppmann and the most popular paintball gun ever made is the Tippmann 98. The Tippmann 98 is the AK47 of paintball, the thing just works no matter what you throw at it, it will keep on firing. The 98 is the perfect cheap paintball gun, it does everything that it should do and there are what seem like an unlimited supply of upgrades and aftermarket parts for them. You can get the E-Grip kit and make it a full-auto machine gun or get a body kit and make it look like an AR15. The possibilities are endless.

The Tippmann Cronus is the little brother to the Tippmann 98, it has identical internal but a more affordable body. The Cronus will take the same amount of abuse at the 98, but is not as upgradable and it is a bit harder to take apart and service. Tippmann also make the Cronus Tactical, that comes with a larger barrel shroud, collapsible stock and carrying handle. You can also get Tippmann Cronus upgrade kit that includes all the goodies that would come with the Cronus Tactical.

Now the BT-4 Combat! The to main standout features of the Combat is that the valve is rebuildable and the frame and be removed. Being able to remove the frame may not sound like a big deal, but it makes servicing the gun and cleaning up after play much easier. Being able to rebuild the valve is a big deal! Lets say on a Tippmann 98 an o-ring in the valve goes bad, you canâ€™t just replace the o-ring, Tippmann wants you to buy an entire new valve! With the BT guns you can simple replace the bad o-ring and you are back on the field!

How to pick a starter paintball gun

PBRML uses cookies to ensure that we give you the best experience on our website. If you continue to use this site we will assume that you are happy with it. OkPrivacy & Cookie Policy