This is a review of the Empire EVS paintball mask, not the Empire EVS HUD. We will, however, be doing an EVS HUD review when it becomes available in November.

The EVS is an entirely new paintball mask from Empire. Empire’s previous high-end paintball goggle was the Empire E-Flex (which is still in production, but only in black). The E-Flex was really just a combination of the Empire E-Vent and the JT ProFlex; it is a great mask but wasn’t really groundbreaking. The EVS, on the other hand, is all new!

The first thing you notice when picking up the EVS is its super flexible lower. The bottom is made of rubber similar to what can be found on the Empire E-Flex or JT ProFlex. The flexible soft rubber lower allows the mask to flex a bit more, making it more comfortable and possible to get a few bounces from. 🙂 Other high-end paintball masks, like the Virtue Vio and HK HLR, have a much more riddle lower, making the mask a bit more durable, but not nearly as comfortable.

Ventilation on the EVS is also much better than that of its competitors, the Dye I4, HK Army KLR, and Virtue Vio. Typically, high-end paintball masks are very small and fit to the face very tightly, and have very little ventilation, making them very hot and making it harder to breathe in. The EVS, however, is a bit wider and sits off the face about 30 percent more than the other masks in its price range, allowing for better air circulation and breathability. The KLR I4 and VIO also have very minimal and small ventilation holes, while the EVS has much more generous holes surrounding the mouth, allowing air to flow more freely.

Empire has also redesigned its lens retention system. The Empire E-Flex/E-Vent was easy to remove, though it did have a few pieces that you had to remove from the goggle that could be lost. With the EVS, you do a simple pull and twist on both sides and the lens comes right out. It really is simple. So far the Dye I4 and EVS have the easiest lens removal system. Much, much easier than the Virtue Vio or HK Army KLR.

Overall, I’m very happy with the mask; my biggest complaint about paintball masks has always been ventilation. While paintball companies try to make their masks smaller and smaller to appeal to the speedball market, they seem to forget that people need to breathe! While the EVS is not, by any means, the most breathable mask, it is much better than its competition in Dye, HK Army, and Virtue. For me, the Empire E-Flex is still the best mask on the market. Why? Breathability. 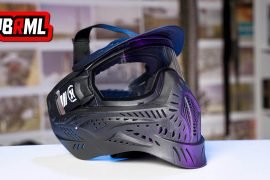 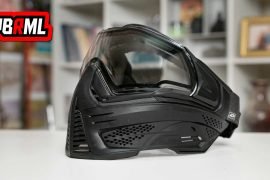 July 31, 2020
PBRML uses cookies to ensure that we give you the best experience on our website. If you continue to use this site we will assume that you are happy with it. OkPrivacy & Cookie Policy