Dye Precision, a paintball industry leader in innovation for over twenty years and a constant supporter of teams at all levels of competition since it’s inception, has signed up-and-coming professional team Baltimore Revo to a sponsorships deal for the 2016 season.

After a very impressive and successful run up the divisional ranks, Baltimore Revo turned pro in 2014. In their first pro year, Revo stunned the paintball world by winning games against top teams during dramatic, come-from-behind victories.

“Baltimore REVO is proud to announce that we have signed on with Dye. Dye Precision has always been one of the leading companies in the industry with its innovative products and REVO is looking forward to utilizing some of the best equipment available, such as the DYE M2 marker, R2 Loader, I4 Mask and other DYE soft goods. We believe this relationship will help raise our game to the top level of tournament paintball. We’re very thankful Dye has given us this amazing opportunity to represent them this year. Look to see Revo back on the podium this season with the latest and greatest from Dye Precision.” –Henry Sentz, Captain Baltimore Revo

Over the past seven years Revo has built a solid team that’s deep across the board with fast attackers in all the front positions and versatile support players to back them up. Initially known for a conservative, gunfight heavy style, which helped them with their early divisional success, they’ve quickly evolved their strategy to utilize more aggressive game plans and counterpunch pushes since turning pro. After playing local events in 2008, Revo moved on to playing national events in 2011 in Division 3, winning three events and the series title that season. They moved up to Division 2 in 2012, again winning the title, taking two wins. 2013 saw them move up again, to Division 1, where they continued their successful push towards the pro ranks. Chris Williamson, Dye’s General Manager, had this to say about their new partnership with Revo:

“When you first start out playing tournament paintball, you dream of doing what Baltimore Revo has done: work your way up through the divisions, gaining respect by winning tournaments and titles, improve your skills and team strategy, and then finally go pro and beat some of the biggest teams on our sport’s biggest stage. We here at Dye are proud to have Revo onboard as a Dye sponsored team, giving them the tools they need to get that first Pro win. When you really look at talent they have and the work ethic they display, we here at Dye think it’s just a matter of time before they’re contending for the podium.” 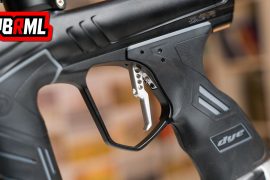